Most addicts of any kind, whether it is a dependency to drugs, alcohol, food, gambling, adventure, work, abusive relationships, shopping, exercise, etc., are addicts before they ever acknowledge that they are addicts.

The reality is that many addicts never admit that they are addicts.

They often say something like, “I’m just having a little fun”, “I’m relaxing”, “I’m trying to be successful”, or “I deserve a splurge once in a while”, justifying the normalcy of their behavior, even when it becomes unmanageable.

They go through life denying their dependency, while continually needing the “fix” to feel better about themselves, or to manage through their day.  They often don’t see a problem with their behavior until it’s too late.

When a person grows up in relational and environmental dysfunction and disconnection, deviant sexual experiences often becomes a normal way of coping or enhancing his or her quality of life.

The Roots Of Sexual Addiction

Most sexual addictions begin in early adolescence, and often before, with the first sexual experience.  These experiences can seem pleasurable and exciting at the time, or abusive and abnormal to the young mind and emotions that are not prepared for the weight of guilt, shame, and loss that awaits them.

In either case, those early sexual experiences can shape a person’s sexual identity, beliefs about sexuality, and sexual behaviors throughout their adult lives.

Without realizing it, children who have sexual experiences tend to normalize deviant sexual behavior, whether it is in gaining acceptance in peer groups, or feeling the victim to sexual predators.

Sexual abuse can include touching, viewing, or any type of sexual penetration, whether it is performed by the perpetrator or the victim.

When a child or adolescent experiences sexual abuse, they have no context to judge or stop the behavior, so they tend to accept it as a normal way of feeling good and having connection, while at the same time, feeling underlying shame, driving them into further secrecy because of the internal moral and emotional conflict.

Studies also show that approximately 80 percent of sexually addicted men report that they were sexually abused as children or young adolescents.

When a person has early sexual experiences the pleasure center of the brain’s neural pathways become fully engaged.  Since other neurotransmitter structures for assessment and self-regulation have not been developed, the child is not able to process, nor control, the sexual arousal.

Without the maturity to place sexual arousal within a context of healthy connection and intimacy, the sexual experience often becomes purely a quest for pleasure, acceptance, and comfort.

The reality is that sexual addiction is not really about sex, but rather a lack of fulfilling relational connection and intimacy.

The problem is that once they understand that their sexual behavior is dysfunctional and unhealthy, it is often too late to stop because their brain’s neurotransmitter system is rutted into a compulsive craving for more.

Hiding does not begin when the behavior becomes an addiction, but rather, when the initial trauma occurs in an early sexual experience. 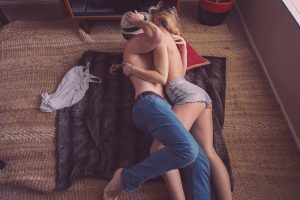 The Normalcy of Hiding

Unfortunately, most children do not share their sexual experiences with anyone for fear of being punished, ridiculed, ignored, or rejected.

According to the U.S. Department of Justice NSOPW (National Sex Offender Public Website), only 38% of victims of some kind of sexual abuse actually report it to someone.  When children and adolescents do reveal sexual improprieties against them, they normally only share with a friend, and never report to some kind of authority.

Moreover, due to lack of resources, most of the reports of sexual abuse or impropriety are not followed up on in detail by authorities.  Child Protective Services (CPS), for example, only investigates 55% of all the incidents reported to them, and only 20% of incidents reported by school officials.

So, even when children do report sexual abuse and improprieties to authorities, often nothing is done, and then child is left in fear of punishment, secrecy, and shame.

Moreover, the child or adolescent feels unprotected and alone, and feels powerless to stop the sexual abuse or improprieties.

More importantly, children learn how to hide what they have been watching on their computers or smart phones.  It doesn’t take long for kids to get around software content blocks, and they are real smart at knowing how to clean their history browsers.

Along with the availability of smart phones to access the Internet anywhere, at any time, kids can continue in secrecy as they develop a dependency that cannot be quenched by normal healthy sexual connection and intimacy in the context of committed relationship.

Coupled with an overwhelming drive for pleasure and an initial unhealthy introduction into sexual understanding and experience, it is no wonder why we have such an epidemic of sexual addiction in our day.

The only way to turn the tide is to create a safe place for children and adolescents to share their experiences and feelings about sex, and offer tools to develop healthy connection and intimacy in relationships.  For this to happen, adults must heal from childhood trauma (ACE’s), re-route their own neurotransmitters, pursue sexual wholeness, and begin to experience wellbeing in every sphere of their life.

It’s time for a revolution of normalizing sexual wellness.

It’s time to take responsibility for the choices we have made to continue the sexual legacy we inherited from improprietous perpetrators, and pursue the normalcy of sexual intimacy in the context of committed relationship.

It’s time to come out of the shadows of secrecy and shame, and begin to live in the normalcy of freedom and wellbeing.

This process can begin today by reaching out to someone for help, healing, and hope.